Isolation in the White Mountains

You probably know this by now, but I tend to visit the White Mountains of eastern Arizona at least twice a year.  There is something special about the stretch of Route 191 between Alpine and Hannagan Meadow and also the Three Forks Road from Big Lake to Alpine.  In my opinion, it is one of the best kept secrets in the state.  People who flock to the mountains during hot Phoenix weekends tend to go about as far east as Pinetop-Lakeside, or maybe even Big Lake.  Any further east of there and there are no crowds.

In the sleepy little town of Alpine, where I stayed for two nights, life goes on as if nothing was going on in the world.  Actually, one of the appealing things about going up there this year was the fact that they haven't had a single case of COVID-19!

The drive up to the mountains took me past the remnants of the Bush Fire which burned in the Four Peaks wilderness area and grew into the 5th largest wildfire in Arizona history.  It was a real shame to see the beautiful desert landscape charred by fire, especially knowing it was human caused.  I must have driven 60 miles of the western border of the fire (the Beeline Highway, or State Route 89) and most of the time the landscape to my right was burned.  To date, this fire has burned over 300 square miles of desert scrub and the pine forests of Four Peaks.  What a shame.

At any rate, a couple of hours after that, I was up in the area that pulls me in every year.  Ahhh the mountains!!  And I had them to myself.  Over the course of 2 days, I ended up hiking about 15 miles.  I took the hike to Aker Lake, part of the KP Creek trail, part of the Foote Creek trail, and another unnamed trail/road off into the wilderness.  As is always the case, I was the only one parked at the trailhead and I never saw another human the whole time.  I did most of my hiking in the early morning and while many Phoenicians were baking in 110+ temperatures, I was enjoying lows in the 40s and highs in the 70s!  I saw loads of wildlife and came across countless meadows.  Here are a few pictures... 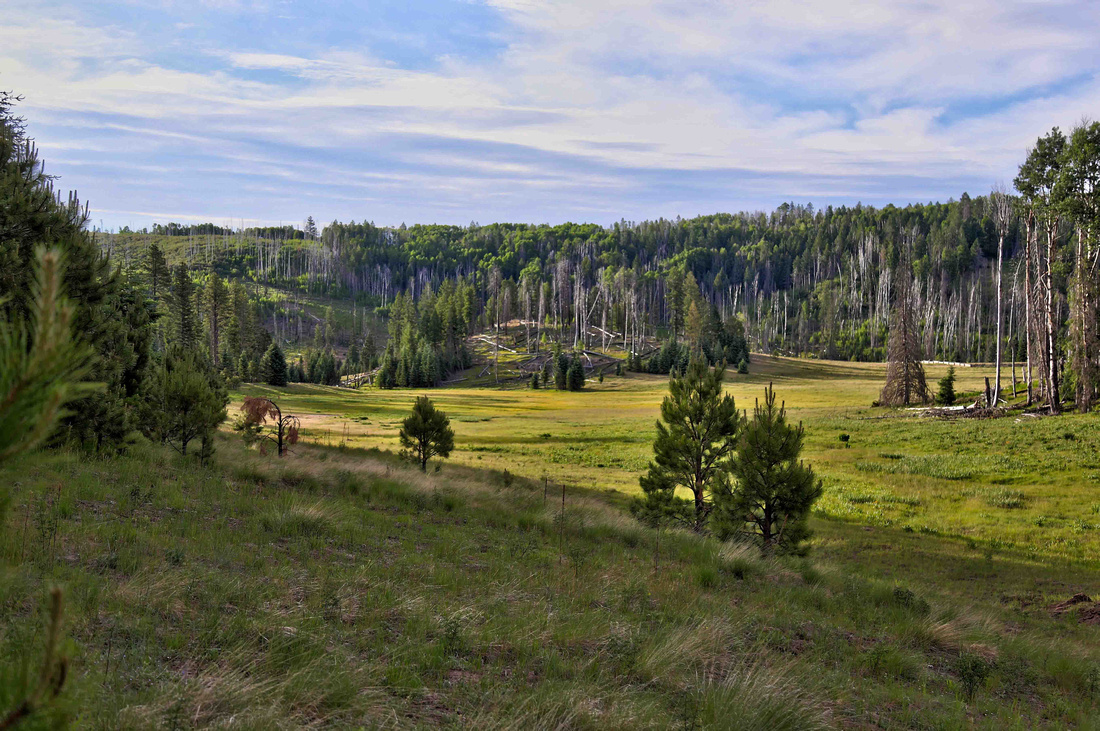 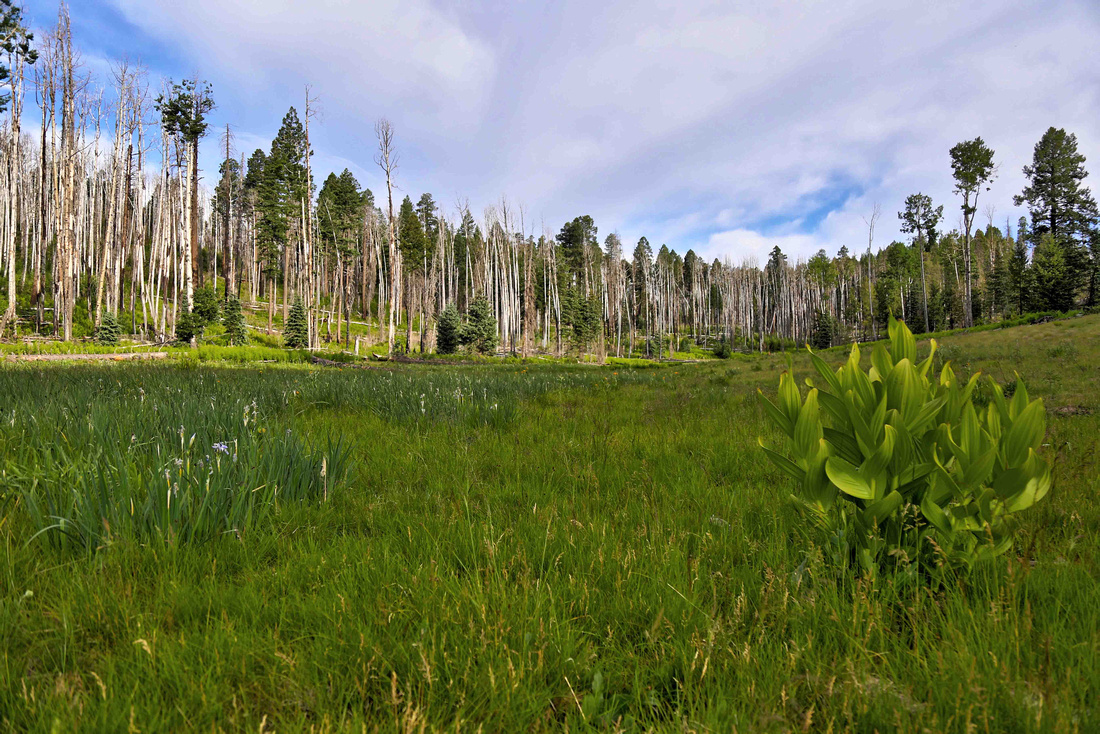 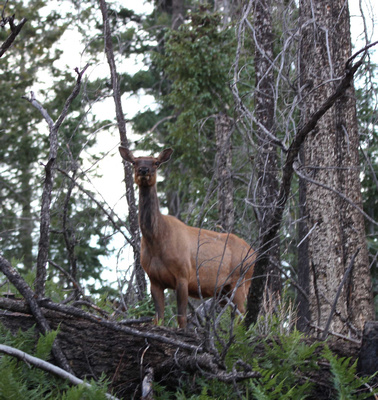 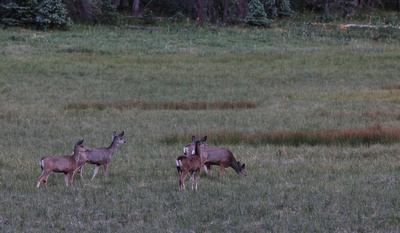 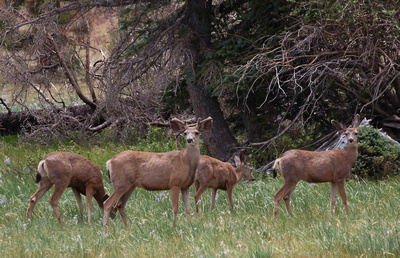 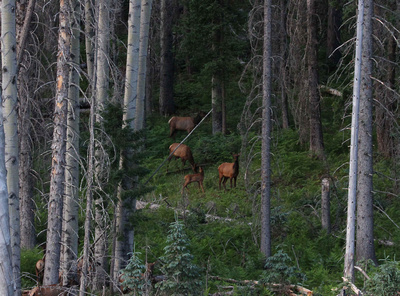 I saved the best part of this trip for last.  Out on one of my hikes, I spotted a pair of Mexican Gray Wolves!  I was able to get a pretty decent shot of one of them.  Mexican Grey Wolves are an endangered species and there are rumored to be only between 131 and 183 left in the world!  These wolves were hunted to near extinction by the mid-1900s.  In 1989, there was an effort to reintroduce the wolves to this area of the state.  Their numbers have very slowly risen since then.  On several occasions, I have read about their story, and I have even heard their howls and describe that experience in previous blogs, but never in a million years thought I would see these elusive mammals, let alone have the right gear to capture a photo!  I used my Sigma 600mm wildlife lens to capture these shots.  I was probably 150 feet away from them... 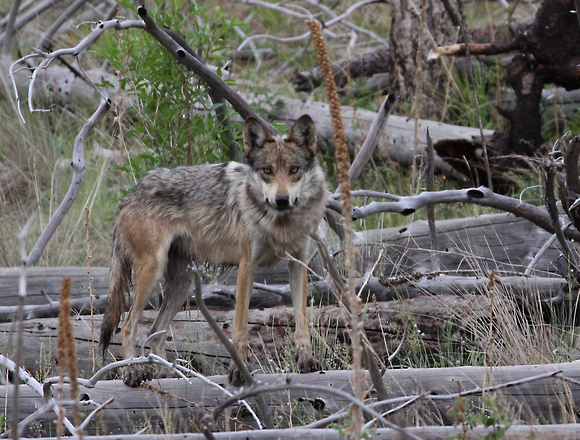 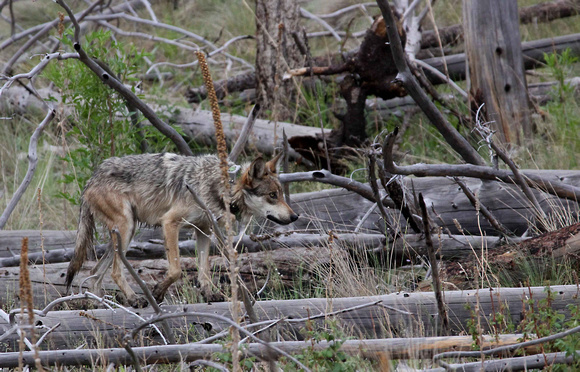 What an amazing encounter!  You can read more about the Mexican Gray Wolves and their reintroduction into the wild here and here.

It is not unusual to have other interesting encounters and run into other adventurers in town.  One afternoon, while stocking up at the local Alpine grocery store, I ran into a couple that were riding their motorcycle up and down RT-191.  I talked to them both and the man was just a hoot.  He was essentially a big time conspiracy theorist and went on and on about how COVID-19 is nothing but political scam, how racism and bigotry don't exist, and then he asked me a question after he found out I work for a company whose main customer is NASA...  he said: "Scott - Do you think we actually landed on the moon??!"  We laughed for a few minutes and then I socially distanced!

I ended up taking a new route home, since just to the south of Hannagan Meadow, Route 191 was closed.  I was a little disappointed because that road is an amazingly desolate and insanely curvy route from Hannagan Meadow down to Clifton-Morenci.  It was closed due to yet another wildfire.  However, I ended up taking a detour through western New Mexico (RT-180 to RT-78) which was quite a scenic drive.  I over-nighted in Safford, Arizona and took the Swift Trail (AZ-366) up to the top of Mount Graham.  That in and of itself is another amazing drive that climbs from about 3,000 feet to over 9,000 in 16 miles!  Here's a photo from near the top of Mount Graham.  Surprisingly, one is looking down on other mountain ranges.

View from the top of Mt Graham

I hope that you have enjoyed reading this and I hope that you get out and take advantage of all that Arizona has to offer even during a world-wide pandemic.  Until next time, happy adventuring!

Gary Warnica(non-registered)
Wait wut??? you mean we actually DID land on the moon???...LOL Good one!! Enjoyed reading your blog and your pictures are amazing. Great to experience the Mexican Grey Wolf live and in person...and with no other humans around. Awesome experience. Thank you for sharing it and capturing the moment for us.
No comments posted.
Loading...
Subscribe
RSS
Recent Posts
Adventuring in the White Mountains... Again! Idyllwild California Arches and Canyonlands National Parks Camping at the Black River Camping at Promontory Butte and Reynolds Creek Isolation in the White Mountains Social Distancing Wildflowers in the Superstition Mountains Isabela Puerto Rico Winter in Southern Arizona
Archive
January February March April May June July August September October November December
© Scott Sigmund