Just like any of the National Parks, I just don't get tired of visiting them.  On Christmas Eve 2021, I made plans to go visit one of my favorite places...  Moab, Utah.  So I booked a nice room at Scenic View Inn and Suites and motored on up there on the day after Christmas.  Moab is right smack in the middle of Canyon Country and home base for excursions to Canyonlands National Park, Arches National Park, and Dead Horse Point State Park.

The Green River, which originates 750 miles to the north in western Wyoming, and the Colorado River which originates in Rocky Mountain National Park in Colorado are responsible for carving out Canyonlands while Arches was created primarily by water and wind erosion.  Although only separated by a few miles, they are vastly different looking areas and spectacular for hiking, biking, four wheeling, and of course Adventure Photography!

While in Arches NP the first day, I woke up before sunrise, drove to Arches and hiked to Delicate Arch which is a 3 mile out and back hike that gains 500 feet in elevation.  Most of the hike is ascending over solid sandstone.  It is quite a slog, and it was pretty cold and extremely windy once I got up top, but the wind is what created all these beautiful rock formations in Arches National Park.

The "trail" to Delicate Arch (mostly this is a scramble up this massive sandstone slab following others and rock cairns). Open up the pic to see the little specks which are other hikers.

The last hundreds yards or so was up a narrow ledge...

Then the big payoff... 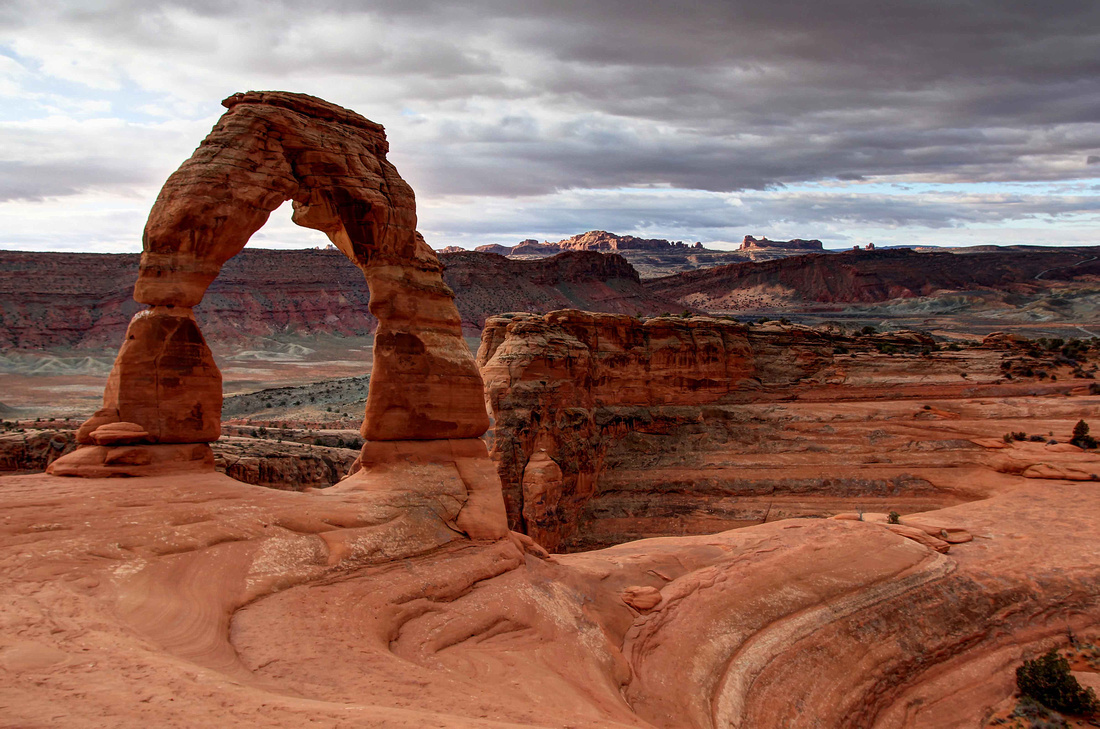 On the way down from Delicate Arch, I took a small side trail to some petroglyphs. 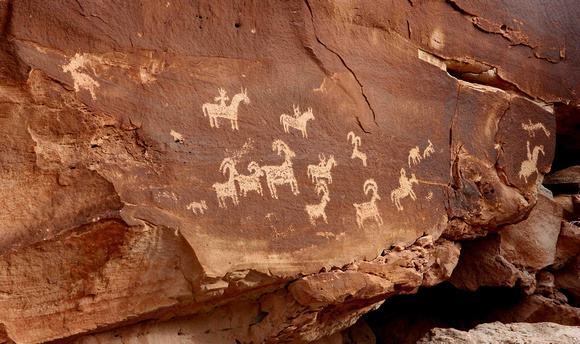 After that hike, I continued on to the end of the park road and ended up hiking to Sand Dune Arch, Broken Arch, Tapestry Arch, and then through the campground and between gigantic sandstone rock fins for a nice little 3 mile loop.  Here are a few pictures from that hike: 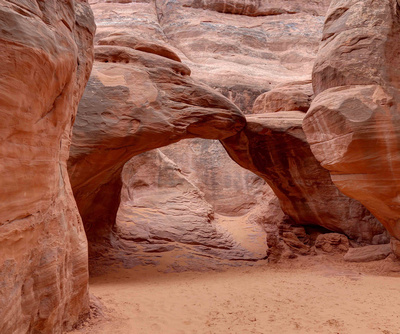 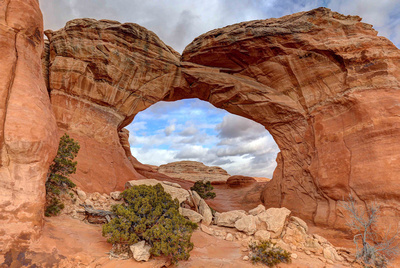 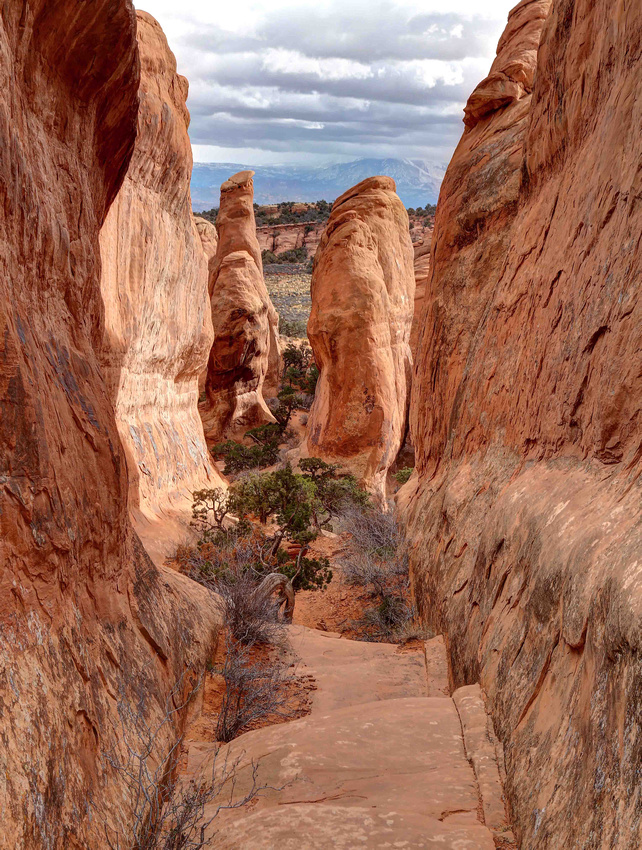 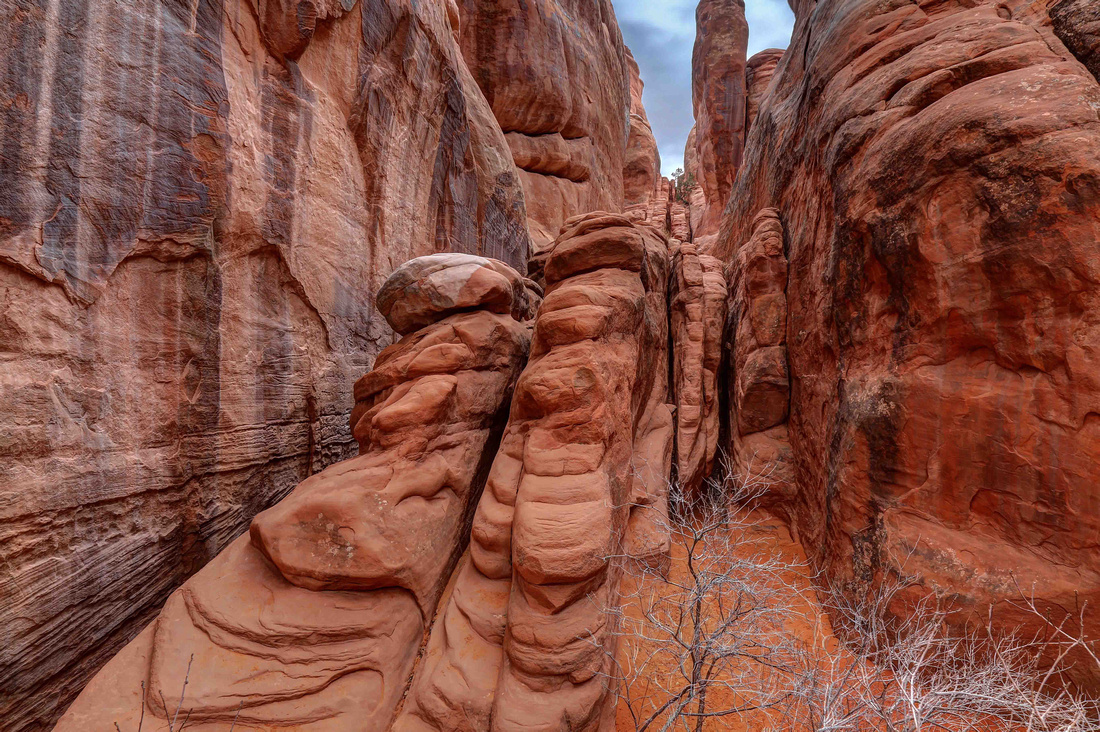 I checked out Landscape Arch as well as a couple of short hikes to the Fiery Furnace, Double Arch, Turret Arch, The Windows, and Garden of Eden for about 4 more miles.  In the afternoon, I tried to take a scenic drive up into the mountains called the La Sal Mountain Loop Road.  Unfortunately, at about 10 miles in to this 60 mile road trip, I ran into too much snow on the road and was forced to turn around.  I guess I need to go back in the Spring and check it out!

The next day was dedicated to exploring the Island in the Sky district of Canyonlands National Park and also a short side trip to Dead Horse Point State Park.  While in Canyonlands NP, I hiked to Mesa Arch twice (about 1.2 miles), Grand View Point (2 miles), Upheaval Dome and part of the Syncline Loop (4 miles), as well as Aztec Butte (2 miles).  I took a few short walks at the Green River Overlook and near the visitors center totaling a couple of miles.

Here's a photo from Mesa Arch in the early morning.  For most of my trip the skies were angry and overcast with occasional raindrops and snow flurries, so it was pretty amazing that the sun peaked out for a few minutes during this hike because the morning sun really lights up the arch and makes for some great pictures! 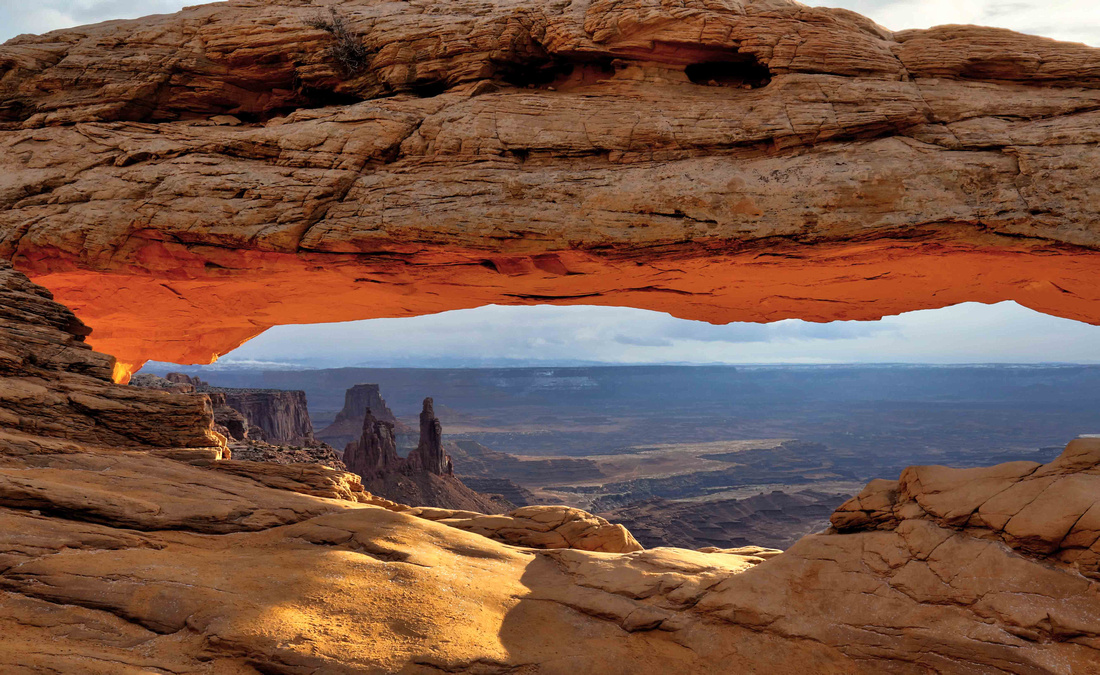 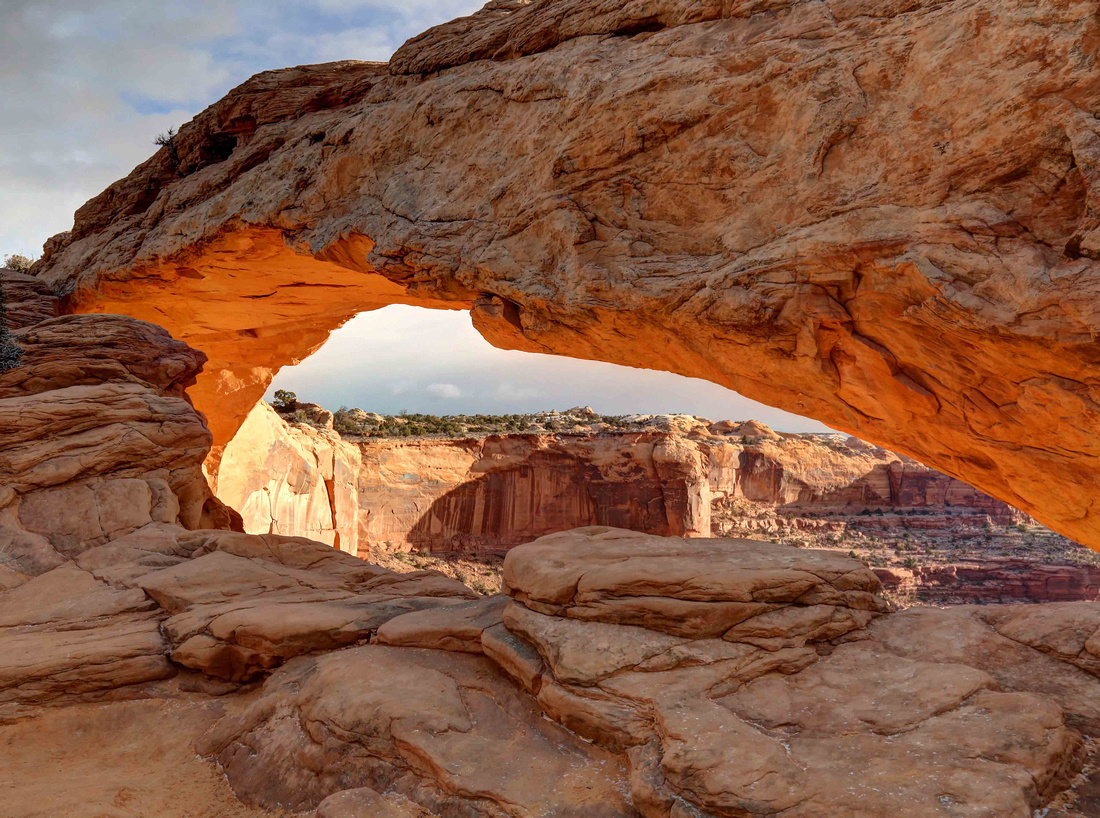 Here's a few pics from the hike to Grand View Point... 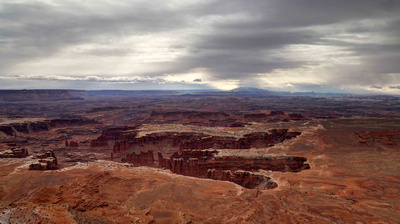 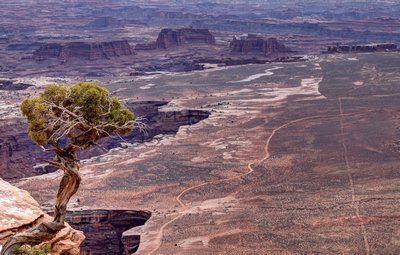 And a few more from the hike to Upheaval Dome.  It turns out, it is pretty much a mystery to geologists how this feature formed.  Some say it was the result of a salt dome that pushed its way up through the sandstone.  Others believe it was an impact crater left from a meteor.  Either way, it is a pretty striking feature in Canyonlands and one that was well worth the hike to. 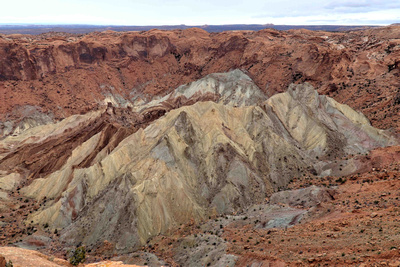 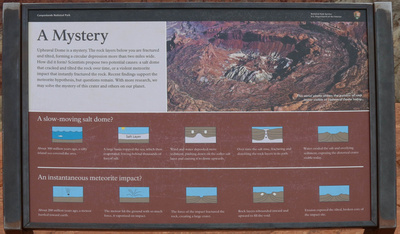 And finally a view from the Green River Overlook... 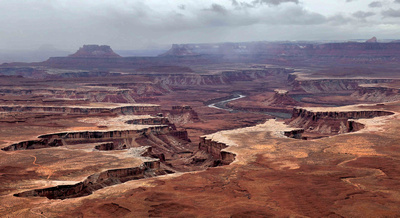 After that, I checked out the Shafer Trail and Canyon overlook.  The last time I came up to Canyonlands (in 2017) I wrote about the Shafer Trail being closed due to a record snowfall.  Well the same thing happened during this trip.  The dirt road was open on Monday, but closed on Tuesday.  This is now the third time this has happened to me!!  Again, yet another reason to return in the spring or fall.  I also stopped at Dead Horse Point State Park which is adjacent to Canyonlands, and snapped some photos of the Colorado River and the amazing canyon that it cut over millions of years.  Here's a great photo...

After all that hiking (22 miles in two days!) I was hungry!  And I am a fiend for pizza, especially after a long day of hiking.  I went back into Moab and found a place called Antica Forma.  Their pizza was insane good and I would highly recommend it to anyone visiting Moab!

At last, it was time to return to the Valley of the Sun, but that did not mean the photo opportunities were over.  Actually the trip up and back takes you through some pretty scenic areas including Monticello Utah, Bluff Utah, Monument Valley, The Painted Desert, and even Flagstaff.  Early into the drive I took a short side drive to another district of Canyonlands National Park called the Needles, and captured a photo of a place called Newspaper Rock which is an amazing collection of Native American petroglyphs.  Unfortunately, vandals also decide to make their own petroglyphs (that really pisses me off, so please don't do it!). 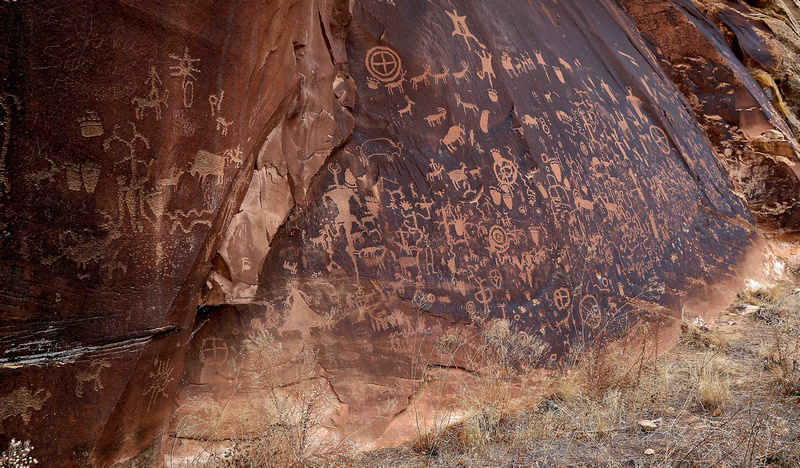 I hit Monument Valley on the way up and back too and got some great shots both with and without snow... 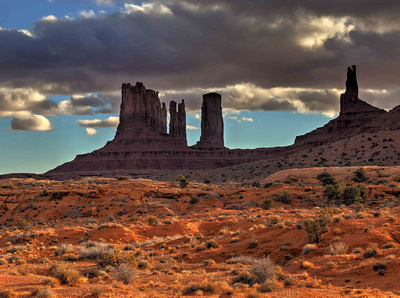 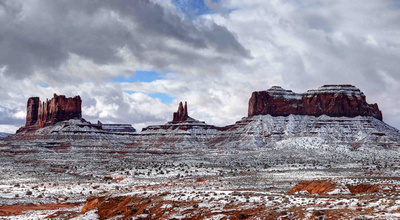 What a great way to end 2021.  I am hoping that 2022 will be filled with even more adventure.  Happy New Year to all my visitors and I hope you all have a wonderful year too.  Happy adventuring!