I never thought I would top 2009 as far as the number of awesome trips and photo opportunities, let alone do it in the very next year.  If I had to choose a single word to describe this trip to Zion, it would be EPIC!!  One of my greatest hiking adventures came during this trip to Zion over the New Year holiday, and it is one I will never forget.

Zion gets pretty cold in the winter and they get some snow, which closes a lot of the trails. It is also gets quite peaceful as there are few visitors and there are some spectacular displays of ice and snow as you will see.  We were surprised to find that the Angels Landing trail was not closed, although there were several warnings about ice and slippery conditions, not something you want to encounter when there are 1,400 foot drop-offs a short distance from where your hiking boots are landing. 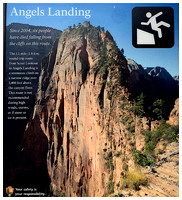 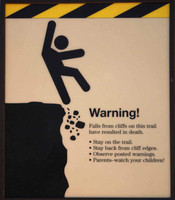 A friend and I decided to be daring and hike Angels Landing anyway.  We ran into and hiked with a couple up to Scout Lookout.  He was a pro photographer and wanted to hang out there for a couple of hours to shoot.  We went on up ahead and tried to hike the last half mile along the narrow sandstone "fin" but immediately encountered an icy climb that we could not negotiate.  Bummed that we had reached our turnaround point, we reluctantly headed back.  We talked with that couple about it and they were happy to loan us their two sets of crampons...  we were back in business!  The last half mile up the rock fin was a harrowing, ice covered, stomach churning, white-knuckled thrill ride.  Crossing the narrowest part of the icy trail was the single most adventurous thing I think I have done.  I even paused (or was scared stiff) and had enough time to have a picture taken.  I don't think that is a smile on my face... 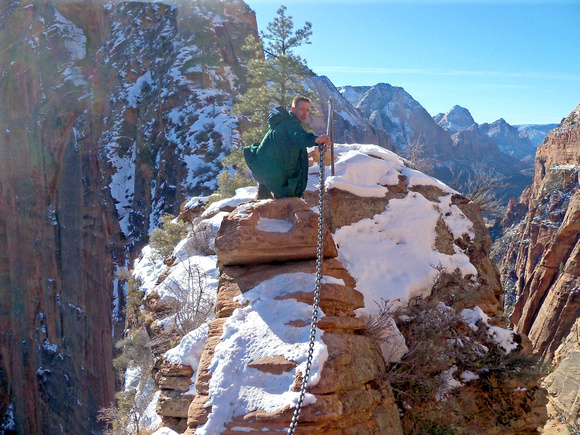 The narrowest part of the hike to Angels Landing

We both made it to the top without incident knowing that we had accomplished something few have, especially with these challenging conditions.  In fact, Angels Landing supposedly got it's name from when Frederick Fisher, exploring Zion with friends in 1916, exclaimed, "Only an angel could land on it!" Ten years later, the trail's construction began.  Anyway, here are some photos from the top:

View from the top of Angels Landing 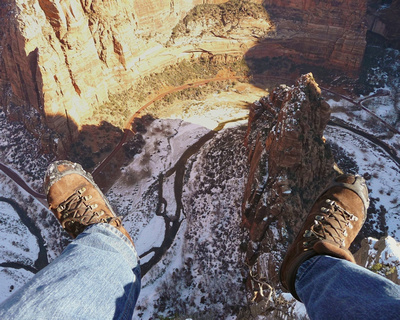 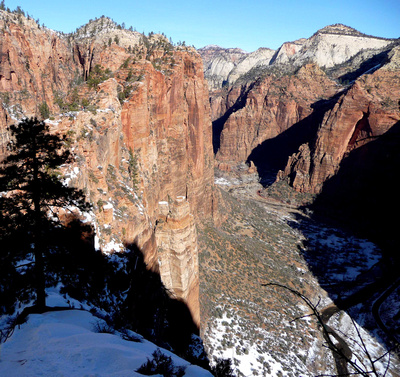 Top of Angels Landing looking towards The Narrows

The thrills were not over!  Shortly after we started back down, I was startled when a shadow passed OVER me.  Was it a plane?  I looked up to see the largest bird in North America, a California Condor with an 8 foot wingspan, buzz a few feet over me.  The condor made a couple more passes and then went on to its business.  I didn't think anything of it, but later while having some lunch and sharing the story, the waitress told us "Oh, you two are lucky.  Those condors have been known to push mountain goats off the ledges.  They plummet to their deaths and the condors have lunch!"  Yikes!!  I had nightmares for several days afterwards, but I'm glad we lived to tell about it and it will certainly be a memory that I will never forget.  Here are a few more photos on the way back down... 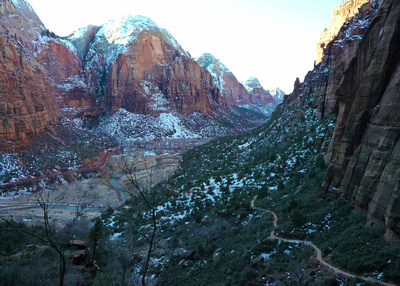 Part way up to the Angels Landing trail 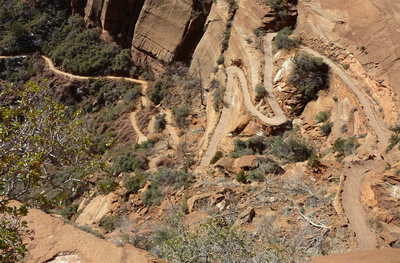 The lower part of the Angels Landing trail 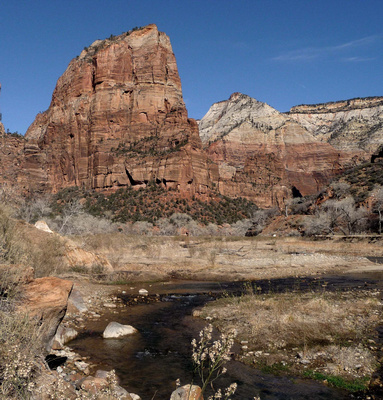 Angels Landing from a distance