My second stop during the December 2016 trip to southern Utah was to Capitol Reef National Park.  This was an absolutely amazing journey into a very remote part of the United States.  In fact, Capitol Reef, and the surrounding areas such as Grand Staircase Escalante National Monument were the last areas in the US to be explored and charted on a map!  No doubt that was due to the rugged landscape and the remote location.

I spent a day driving Utah Route 12 which is supposedly the second most scenic drive in the US.  It did not disappoint.  I took a couple of side trips... one to hike down to Upper Calf Creek Falls and another to drive the Burr Trail Road.  The hike to the falls itself was a bit unsettling because I was alone, out of cell phone range, and I never ran into another person during the entire 3 hour hike.  That was a repeating theme during this trip.  The Burr Trail Road was amazing too and I spent about 3 hours driving 22 miles one way before it started to darken.  I think I saw only a couple of other cars! 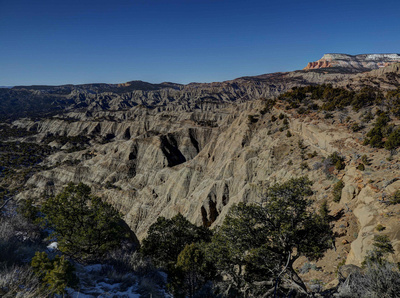 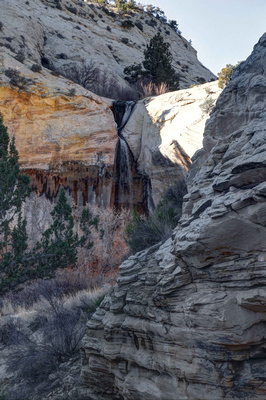 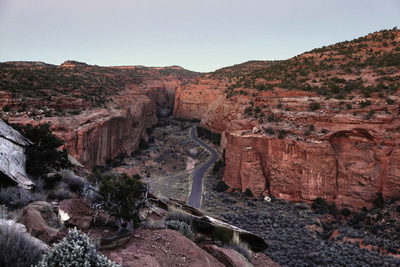 Along the Burr Trail Road near Capitol Reef National Park

Then it was on to Capitol Reef National Park itself.  I spent a day and a half exploring this park and saw a couple of dozen cars the whole time.  At one point, I drove 40 miles down the Notom Bullfrog Basin Road, hiked for a couple of hours partway into a slot canyon, and drove back another 40 miles to the main road and never saw another soul!  One can get quite paranoid in that situation... at one point I thought "what if there is a mountain lion on the other side of that boulder?"  The thought also crossed my mind that I might run into quicksand.  Quicksand!  In a desert!?  Once I got my sanity back, I laughed at myself.  Anyway, here are a few pictures. 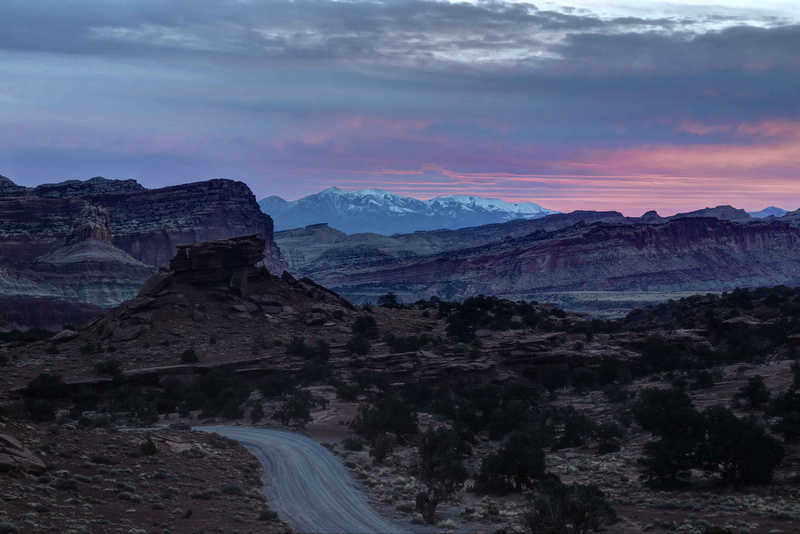 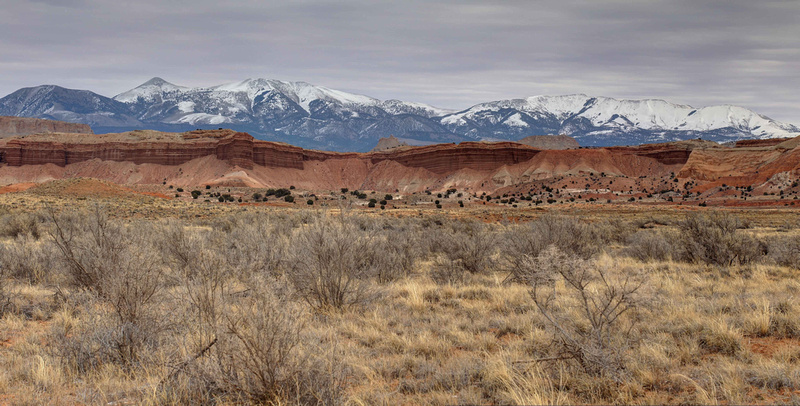 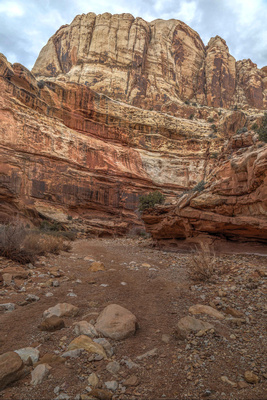 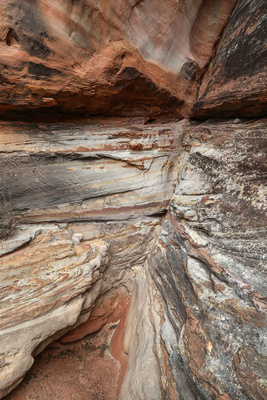 A dead-end in a side canyon of Grand Wash

I then explored the Fruita Historical District and did another hike that ascended 1,100 feet in 2.4 miles.  Capitol Reef is famous for a geological feature known as the Waterpocket Fold.  It is an area where two tectonic plates met.  One pushed against the other and literally tilted (or folded) the entire surrounding landscape.  At the end of this hike called the Rim Overlook Trail, one can prominently see Waterpocket Fold and the tilted landscape.  What an interesting scene!  I ended up logging 14 miles on my boots during my stay in Capitol Reef.  Here are some photos. 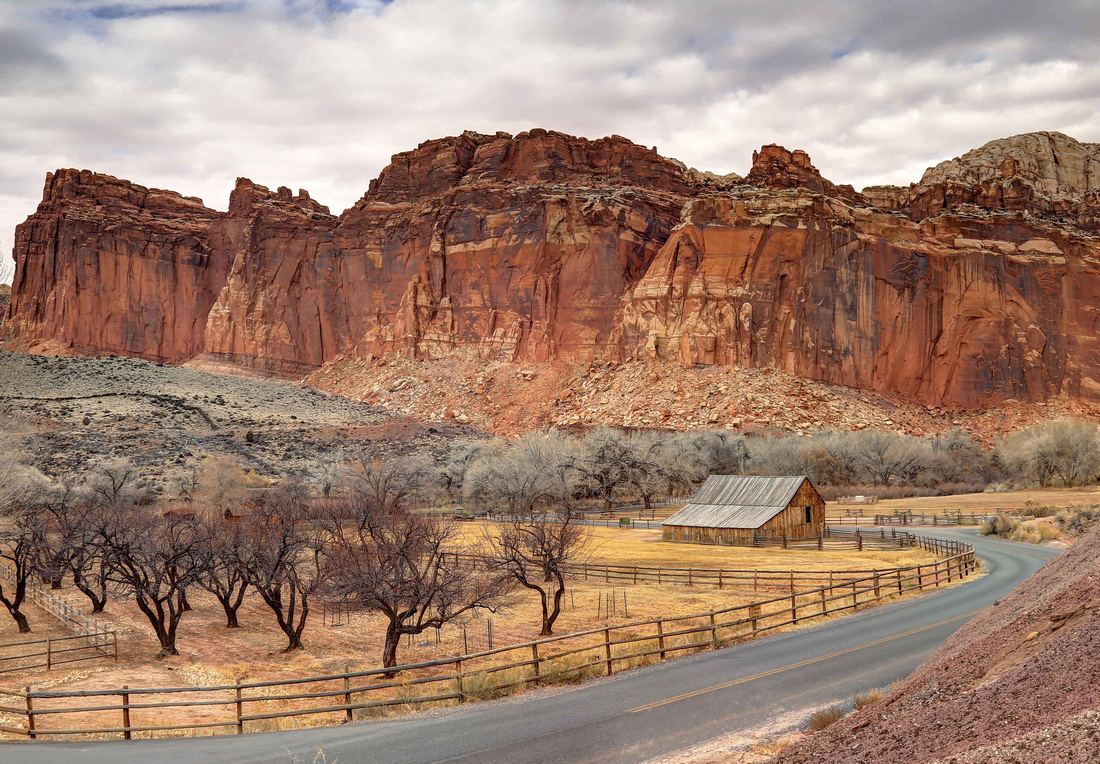 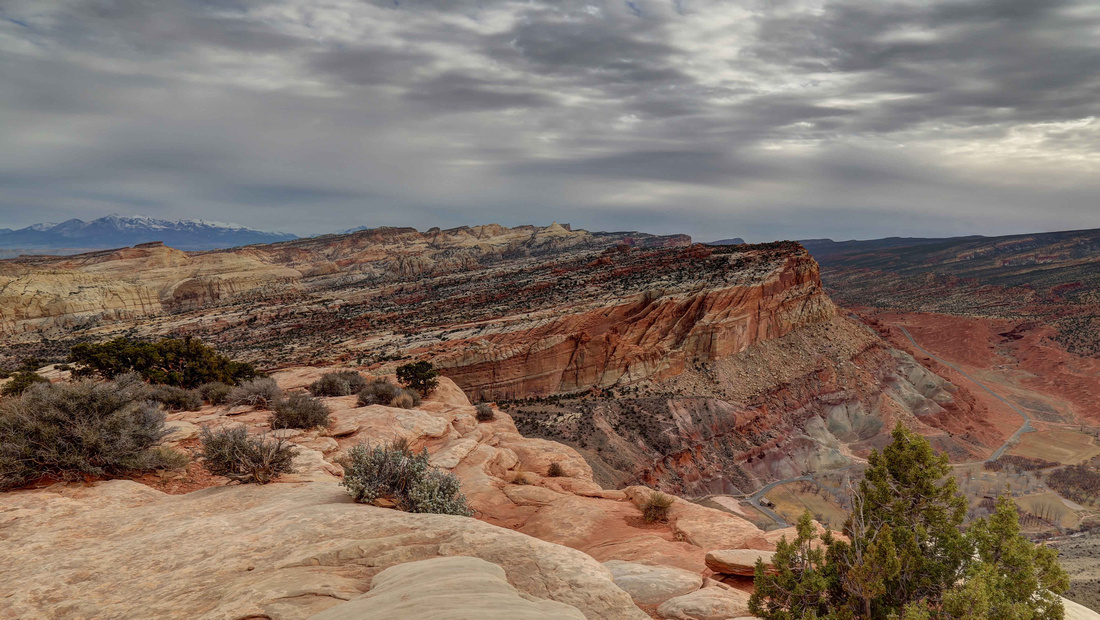 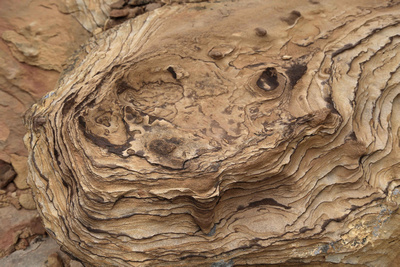 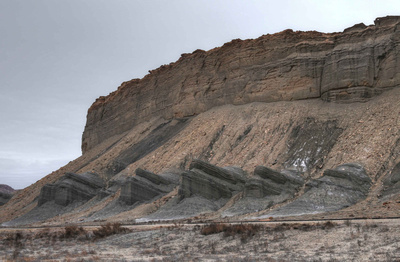 Thanks for reading this far because I saved the wildest part of this Utah adventure for last!  During the whole time spent in Zion and Capitol Reef, the weather was supposed to be sunny and not too cold.  I had checked the forecast on Tuesday the 20th.  On the 21st, I called my parents back in Phoenix and they said it was supposed to rain all night and the next day (the day I was supposed to drive home).  In Utah, that meant snow.  Sure enough, as I ventured home, I ran into a freak snow storm that dumped 6 inches of snow on the road I was driving (UT-95).  At one point, I was going to take a drive down a set of switchbacks called the Mokee Dugway along UT-261.  When I turned onto UT-261 there was only a single set of tire tracks to follow and four miles in they stopped and turned around.  I did too.  To make long story short, I ended up driving about 80 miles in 4-wheel drive at 30 Mph in a 65 Mph zone.  It took 12.5 hours to get home instead of the planned 8.5.  I even tried to drive up the Mokee Dugway from the south end and got to the first switchback.  Here's a pic... 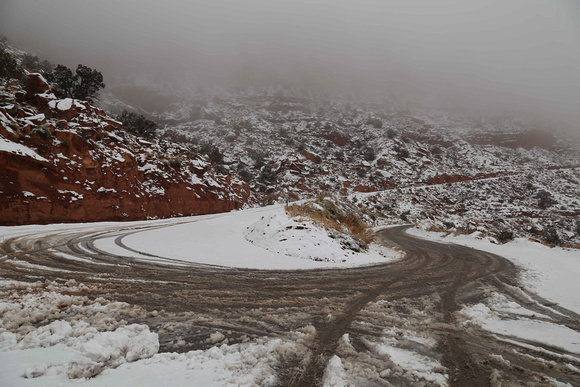 Notice the abundance of tire tracks on the low side and the absence of them on the high side.  Notice the fog as well.  Maybe next time I'll get to drive this very cool, steep, and winding road?!  I was so thankful that I decided to take my 4WD on this trip.  I was honestly going to take my rear-wheel drive 2,700 pound sports car when I saw the weather forecast earlier in the week.  Something told me to take the truck... lucky.

Thank you for reading.

Zdenek(non-registered)
Impressive!!
It is funny that we like to leave crowded cities and escape to nature to experience silence and to relax. But when we are alone and we do not meet other people for certain time we start to be nervous (at least little bit).
I admit that I like doing tours in spring or fall because weather is mild and trails are still not very crowded. I should consider doing something during winter...it may be completely different angle. Many thanks for revealing this to me! ;-)
Please continue sharing you thoughts and great pictures, many thanks for what you have done so far!
No comments posted.
Loading...
Subscribe
RSS
Recent Posts
Adventuring in the White Mountains... Again! Idyllwild California Arches and Canyonlands National Parks Camping at the Black River Camping at Promontory Butte and Reynolds Creek Isolation in the White Mountains Social Distancing Wildflowers in the Superstition Mountains Isabela Puerto Rico Winter in Southern Arizona
Archive
January February March April May June July August September October November December
© Scott Sigmund