You will have to pardon the length of this blog, but it is worth the read, as this trip up to Grand Teton National Park was one of my best trips yet!!  I was not really anticipating an outstanding trip, but to my surprise, I got one.  Actually, I think the weather had a lot to do with it...  the forecast was for rain, snow, and cold temperatures for most days and I thought it might put a damper on plans.  Instead, there was more wildlife out and there was more drama in the skies, which made for some amazing photo ops.

I made the trip during the week of October 8th, 2018.  Even the first evening, when I checked it to my lodging for the week, was a pleasant surprise.  It was a place called Spring Creek Ranch and it was breathtaking!  The place is just a couple of minutes from the town of Jackson Wyoming, yet it was at the end of a steep winding road to the top of a bluff that rises almost 1,000 feet above the town.  I had a rustic inn-type room with a wood burning fireplace, a stack of seasoned firewood outside the front door, and an insanely incredible view of the Tetons from the balcony.

I got there about an hour before sunset, so of course, I dropped off all my stuff and headed out to the park in time to capture the color in the sky.  Here's a couple of photos...  Wow! 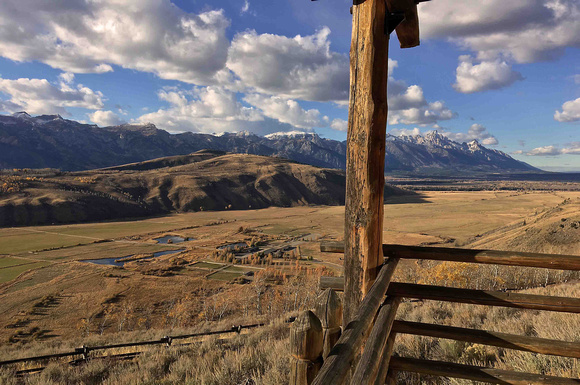 View from the balcony at Spring Creek Ranch 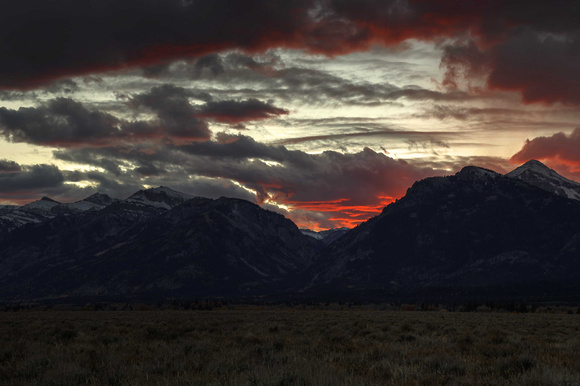 Beautiful sunset over the Tetons

I was charged up and ready for an adventure and couldn't wait until the next day.  I woke up around 4:30 and headed back out to capture the sunrise and look for wildlife.  I drove out to the quite famous Schwabacher Landing near the park headquarters.  You may recall during a previous blog from this park, that when I drove to the parking lot for this fisherman's trail it was packed with cars, and when I hiked to the spot at Schwabacher Landing where many calendar photos are taken, I was met with a throng of people, all lined up shoulder to shoulder.  This time around, I was thankful to have the place to myself.  What a treat!  I was able to capture an awesome sunrise picture with a mirror reflection of the Cathedral Group... 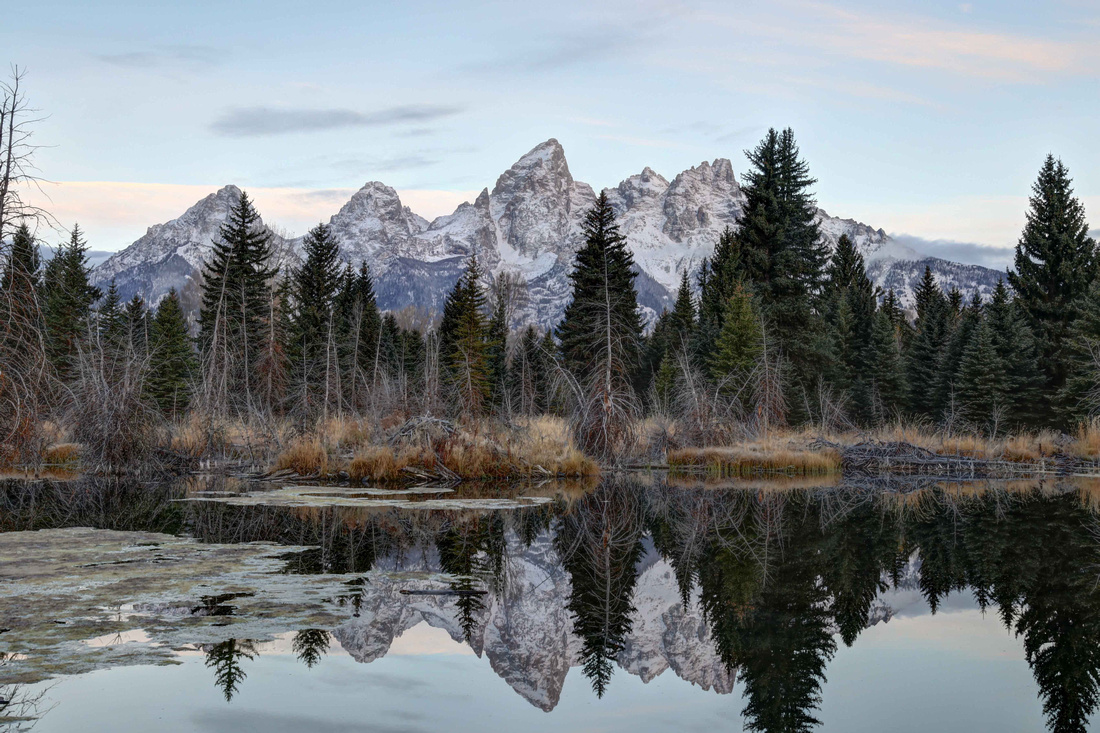 I did run into some pretty nasty weather, so when it was too foggy or overcast to take landscape shots, I went hiking or watched for wildlife.  I ended up hiking several trails, including the perimeter of Jenny Lake, along String and Leigh Lakes, a trail called the Moose Ponds, part of Signal Mountain, and the trail up to Phelps Lake.  I also attempted the Cascade Canyon Trail, but it was quite isolated, dead quiet, and I very quickly got to a point where the snow was too deep to manage with regular boots.  I ended up hiking about 20 miles worth of trails.

One of the more memorable hikes was up to Phelps Lake. It was a little remote, and I didn't want to hike it on my own, but luckily there was a large family hiking just in front of me.  I ended up catching them and when we got to Phelps Lake, we struck up a good conversation.  They were a wonderful crew from Memphis and we chatted for a good half hour.  They were as thrilled I was to be visiting and the view of the lake was stunning.  So a special shout of thanks to the Gilbert family for making a good hike great and for scaring all the bears away!  If it wasn't for their company, I would not have gone on the hike.  Here's a picture of Phelps Lake and dramatic fog and cloud cover in the mountains behind the lake... 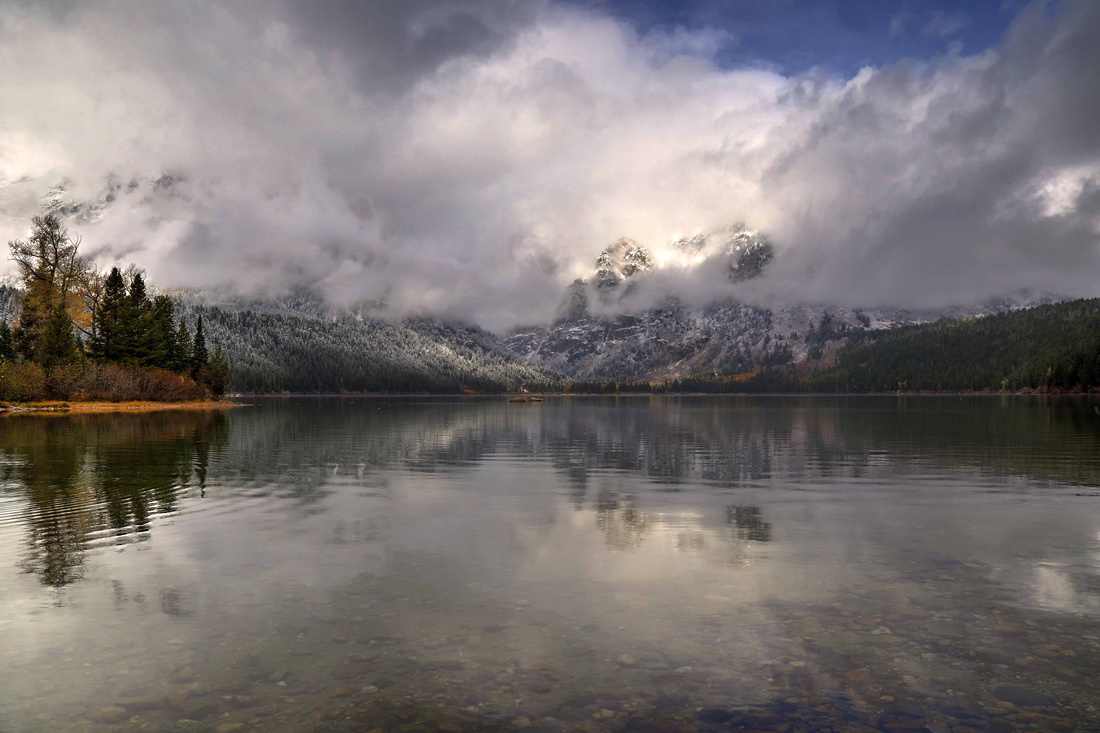 Another amazing part about this trip was that I got to use the newest addition to my gear.  I purchased a Sigma super-zoom wildlife and sports lens a week prior to the trip in anticipation of capturing some of the great wildlife the park has to offer.  It is an outstanding lens and I was able to get good full shots of animals that were up to a quarter mile away, and without disturbing them too!  I was even able to capture two massive bull elk in the same frame.  October is peak time for the rut and I imagine seeing two males that close to each other is a rare sight.  Here are some of the shots... 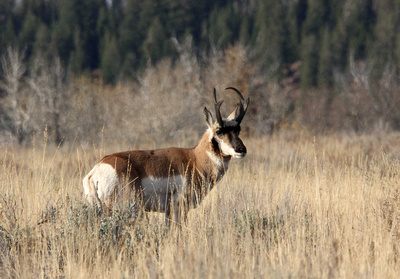 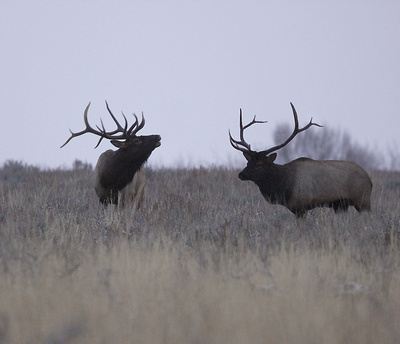 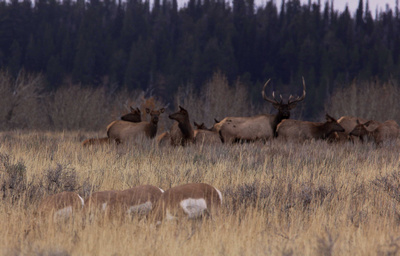 Elk harem near the Snake River 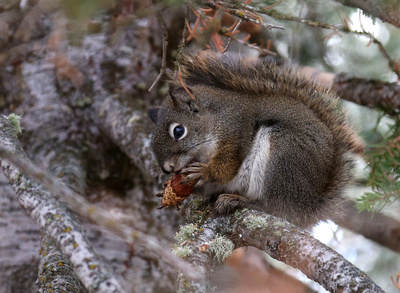 This last one of a moose was actually taken at Spring Creek Ranch and it was sitting right outside the front door of one of the rooms.  The hostess at the restaurant had told me they had a couple of resident moose but that they don't do any harm, but she also told me use the peep hole before I left my room just in case they decided to rest at my place.  Ha! 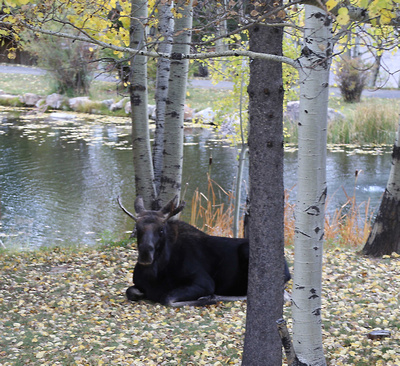 I was also able to capture some outstanding landscapes including these from Oxbow Bend, Signal Mountain, Mormon Row, and near Cunningham Cabin. 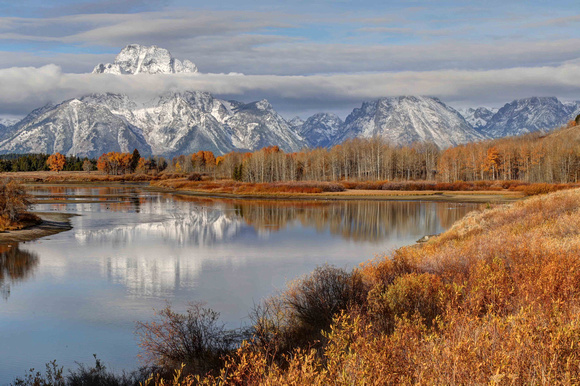 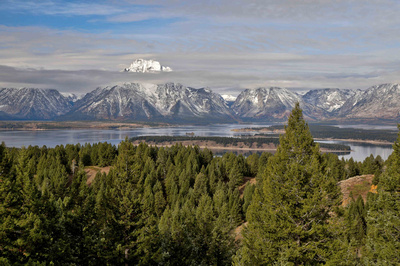 View from the top of Signal Mountain 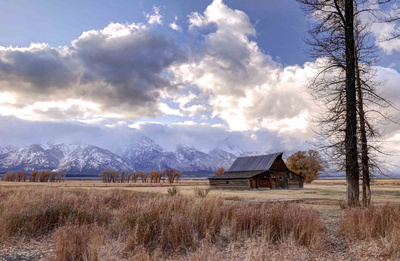 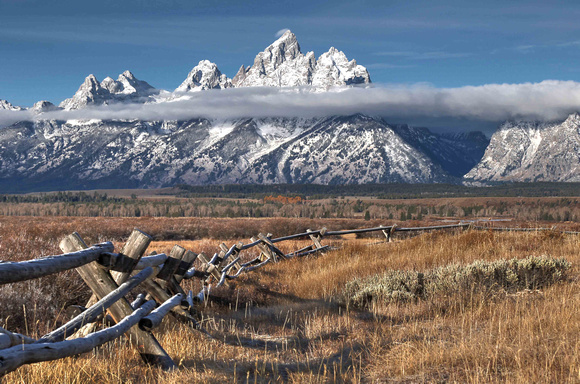 A glorious scene near Cunningham Cabin

Here's an amazing shot from the Snake River Vista, which you might recognize from a famous Ansel Adams shot... 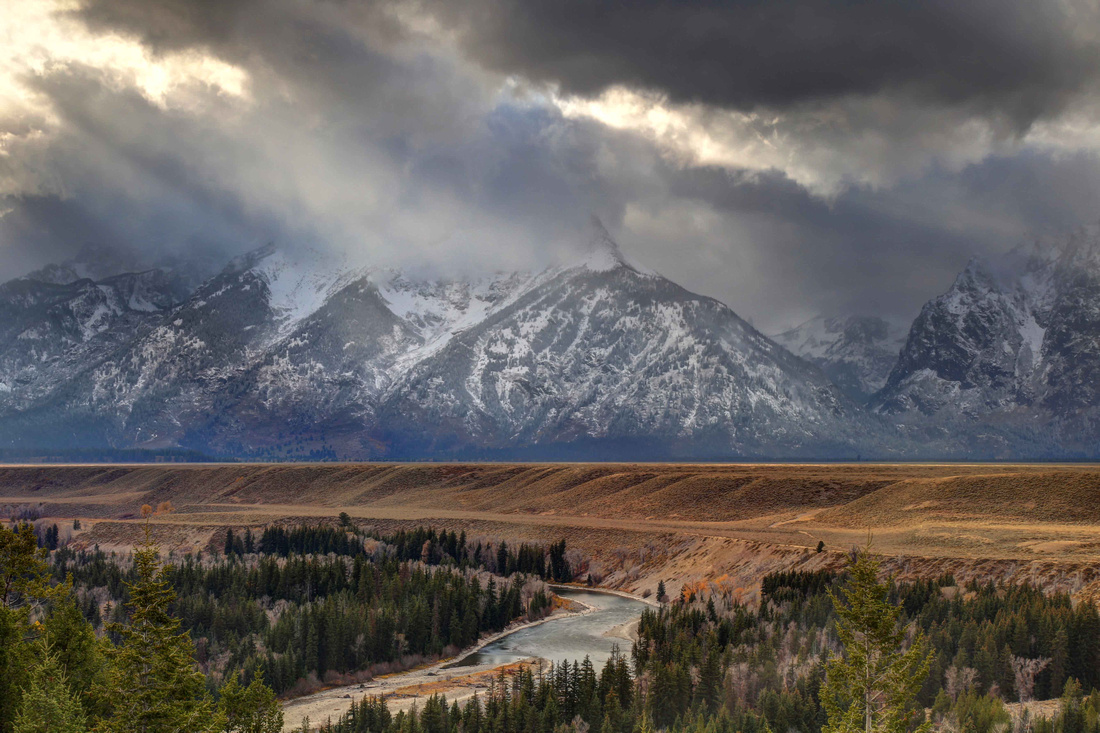 And another on one of the snow days! 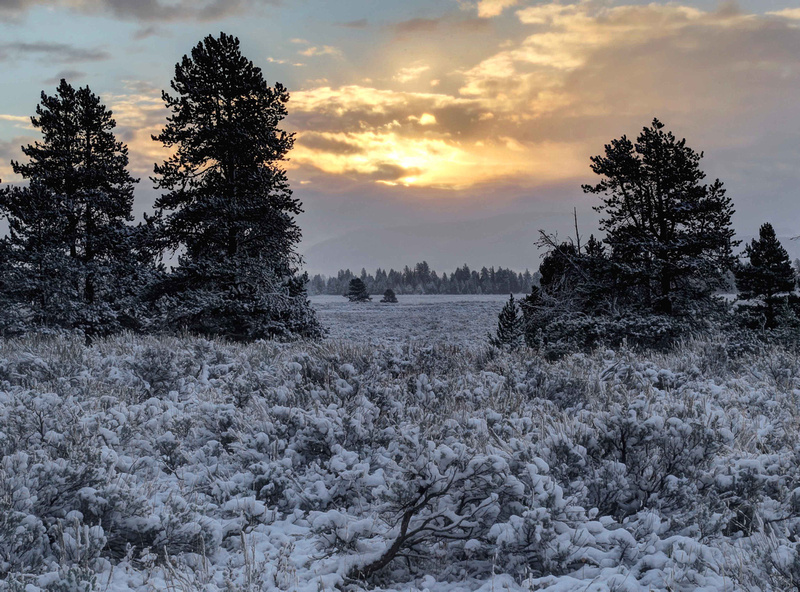 Sunrise and Snow near String Lake

I won't bore you with all the rest of the details, but I'll close with some photos from the 2,515 mile drive from Phoenix to Grand Teton National Park and back.  I have almost always taken the road less traveled and this trip was no exception.  I drove through Logan Canyon, over the Salt River Pass, up the Mirror Lake Scenic Byway, and through Brian Head Ski Resort near Cedar Breaks National Monument in Utah.  I also took a short out and back drive to the North Rim of the Grand Canyon in Arizona.  Here are pictures from the drive... 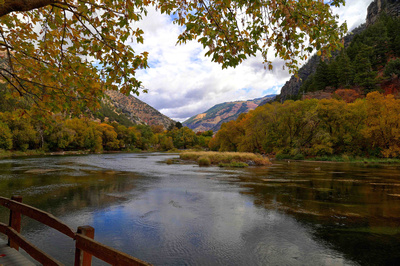 Fall Color along the Logan River in Utah 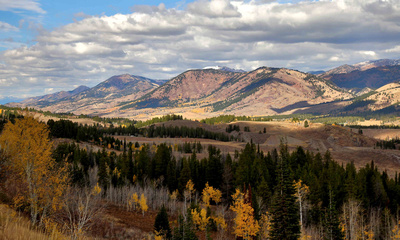 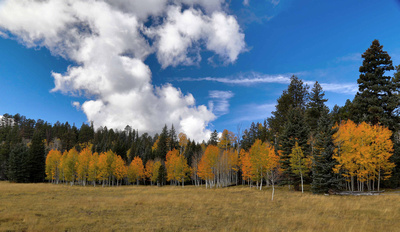 Overall, I have to say that I could probably make a calendar out of the shots taken on this trip alone.  What I thought might be a lousy, cold, wet, rainy, overcast few days ended up being one of the best adventure photography trips ever.  So here's a few words of advice for you... never pass up the opportunity to travel to a beautiful place.  Don't put it off!  Live life to the fullest and enjoy all the scenes that Mother Nature and God have to offer.

Thank you for reading and I hope you have a wonderful day.